Water and energy at the Mill

1. WATER AT THE MILL

The origin of the mill is understood by the presence of water in Pals, an old shallow bay, where floods from the overflow of the rivers Ter and Daró and storms from the sea were very common. Farmers, landowners and locals were constantly fighting to control floods and water levels. This gave rise to an irrigation system dating back to medieval times. In 1321, the trustees of Pals made deals with the king (Joan II king of Aragon) to demolish a mill, embankments and locks that were causing floods. They also made deals to dry the ponds to cultivate the land.

In 1452 the mayor granted a license to Miquel Pere, the prothonotary of Ferran the Catholic, who already had a wheat mill, to build a rice mill and make a canal from the river Ter to the mill and another from the mill to the sea, reinforce with stones, sticks or reeds its exit to the sea, so that the sand didn’t cover its course and the boats could enter and leave without difficulties.
The irrigation of the mill has a length of 12 km with a width of 12 meters and a flow of approximately 3.5 cubic meters per second. The irrigation system originates in the Canet lock and passes through the municipalities of Serra de Daró, Gualta, Fontanilles and Pals. The Molí irrigation canal was declared a cultural asset of local interest in 2005. Irrigation and water pipes form a complicated irrigation network. The Daró Vell, from the lock-gate of Mas Carles, is transformed into multiple arms and the three main ones are: the Molí de Pals irrigation canal, the riera Nova (a stream which comes from the lands of Peratallada) and the Restallador. 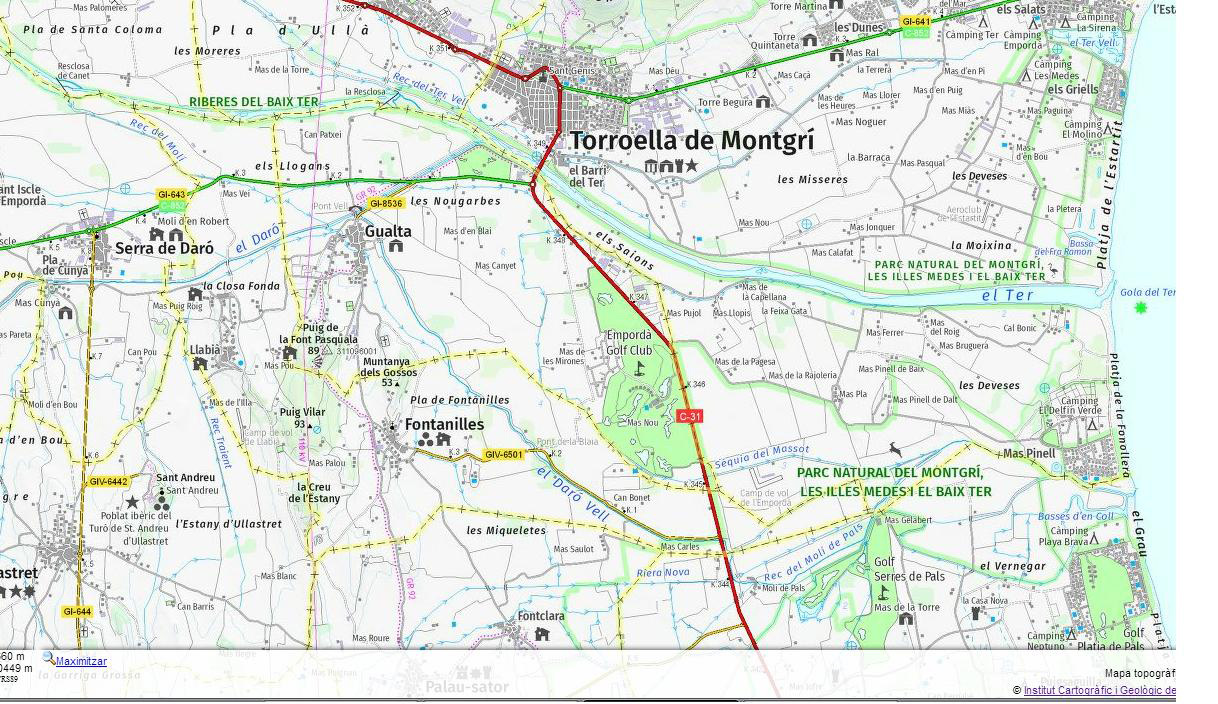 3. OPERATION OF A TURBINE

An hydraulic turbine is a rotatory mechanical device that extracts energy from a fluid flow, such as water, and converts it into useful work. The turbine transforms the energy of the movement of a fluid, into rotation mechanical energy. Energy can come from a waterfall or from the current itself. This rotational movement is transferred by a shaft that can directly move another machine or it can also be used for generating electrical power when combined with a generator. There are two types of turbine Impulse and reaction turbine.
In this case, the water moves the impeller, not by the direct blow, but by the reaction caused by the exit of the water on the impeller. In this case, we are interested in having a large flow of water that pushes the water that enters the pipes so that it comes out with great force (pressure) and moves the impeller with more force. The height at which the water falls here is not very important because it does not hit the blades directly. 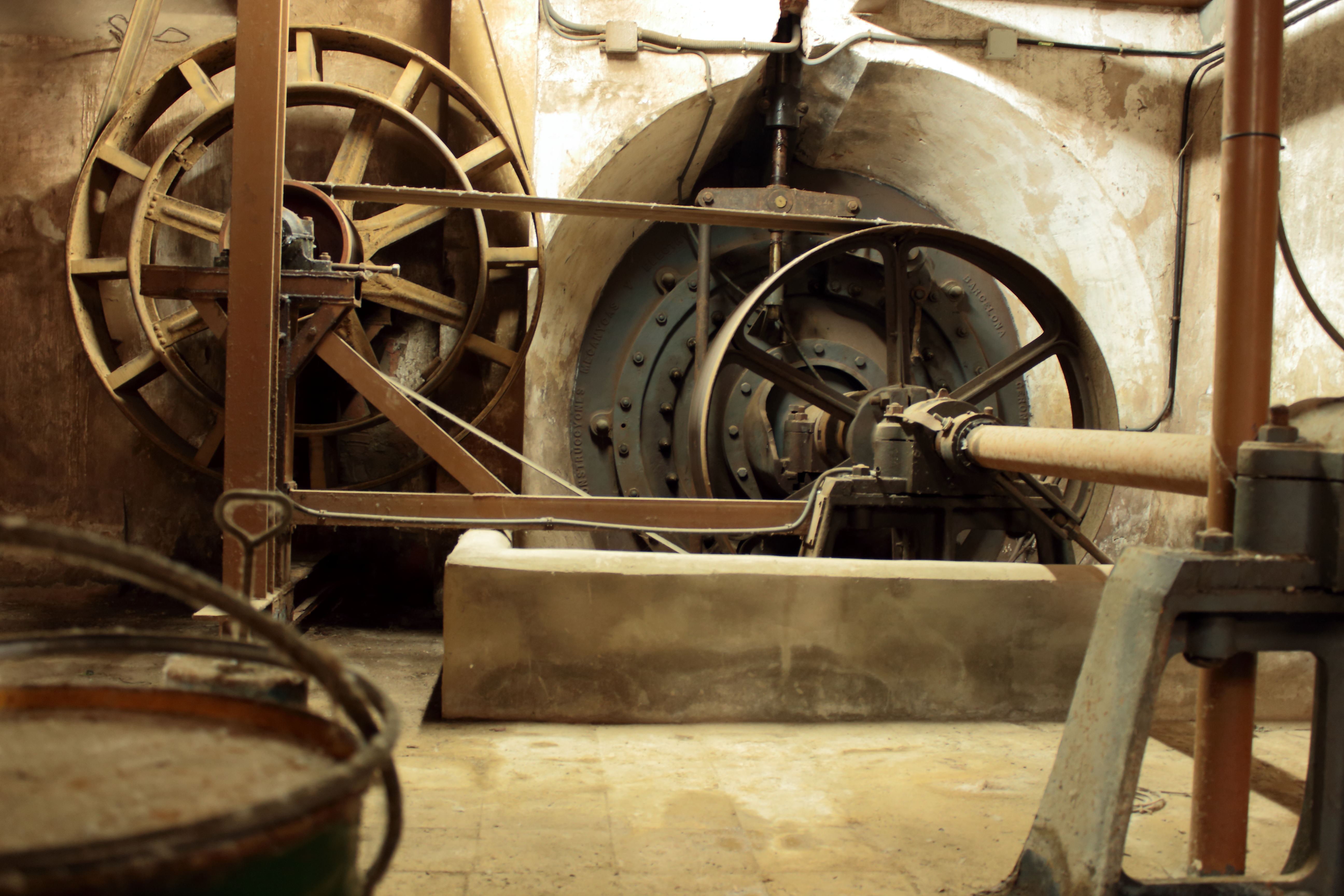 4. PARTS OF A TURBINE
As can be seen in the drawing, the water is collected by an inlet pipe and distributed to various outlet points by the distributor. The points where the water comes out are called nozzles, which cause the water to push the blades of the impeller that rotates the turbine shaft, also called the rotor. The impeller consists mainly of a disc provided with a system of blades, buckets, shovels or spoons on which the water pushes. Water comes out from the waste pipe to the river or canal flow.

5. FRANCIS TURBINE INSTALLATION AND BUDGET
At the beginning of the 20th century, the working process of the mill was modernized and we found different documents indicating the budgets received for the acquisition of different machines. The budget for the purchase of a Francis turbine, simple, without chamber, with horizontal axis, in the name of Javier de Ros, made by Escher Wyss & Cie, is dated 4th October 1919. It was a Siemens brand steel turbine. In this document you can see in detail the elements that made up the turbine as well as the characteristics of the 3.20 meter waterfall and the 3,900 liters per second irrigation flow. This turbine powered up for a time the shaft that directly fed the gears of the rice mill as well as the shaft that fed the alternator to generate electricity. The modernization and improvement of production performance in the mill and use of the canal's water, allowed considering the production of electricity for the consumption of privates.

Among the documents found in the archive we have a budget, dated August 8, 1919, that includes two machines, an A.E.G. type E.S.D, and a three-phase motor brand A.E.G. Berlin type, which is the one that was finally purchased and installed at the mill. At the beginning of the century, the production of electrical energy was in private hands. It was not until 1944 that a national electricity company was created in the hands of the state. Although the exact date of use of all this machinery cannot be determined, we can certainly assure that at the beginning of the 20th century the mill was modernized with several machines.


INDIVIDUALS SURVEY PHOTO
You can see on the photo below a survey done by the owners of the mill on that period to take best decisions on buying the machinery requiered. They tried to sound out the volumen of the electricity that would be necessary to produce. Later on, they bought the equipment needed.

7. ALTERNATOR OPERATION
An alternator is a type of motor machine that converts mechanical energy to electrical energy in the form of alternating current, through a phenomenon known as electromagnetic induction which says that: “a conductor moving relative to a magnetic field develops an electromotive force in it”. Faraday's law is a basic law that predicts how a magnetic field will interact with an electric circuit to produce an electromotive force. For reasons of cost and simplicity, most alternators use a rotating magnetic field with a stationary armature.
The rotor, one of the parts of the alternator, is an electromagnet, which is usually driven by a turbine. The magnetic field rotates with the rotor at the same speed. The rotating magnetic flux from the rotor intersects the winding of the stator that is placed around the rotor. This generates an alternating electromotive force in the winding, and this generates an alternating current when connected to a consumption.

8. MAIN PARTS OF AN ALTERNATOR
An alternator has the following three main parts: stator, rotor and the air gap.
Stator:  It is a stationary and external part of the machine and is made of very thin sheets of silicon steel. It is a cylindrical hollow piece that surrounds the rotor, which supports the different components that make up the machine. It is separated from the rotor by the air gap.
Rotor: is a rotary and cylindrical part of the machine assembled on a movable shaft. Located inside the stator, supported by bearings (to avoid friction as much as possible and, consequently, a reduction in mechanical performance).
The one used in hydro generators is the Salient Pole Type Rotor. The number of poles are about 6 to 40 so it is rotated with low speed.
Air gap: it is the space that remains between the stator and the rotor, and allows the free rotation of the latter.
Both the stator and the rotor contain electrical coils or circuits. So we can say that an alternator contains two electrical circuits linked by a magnetic circuit. 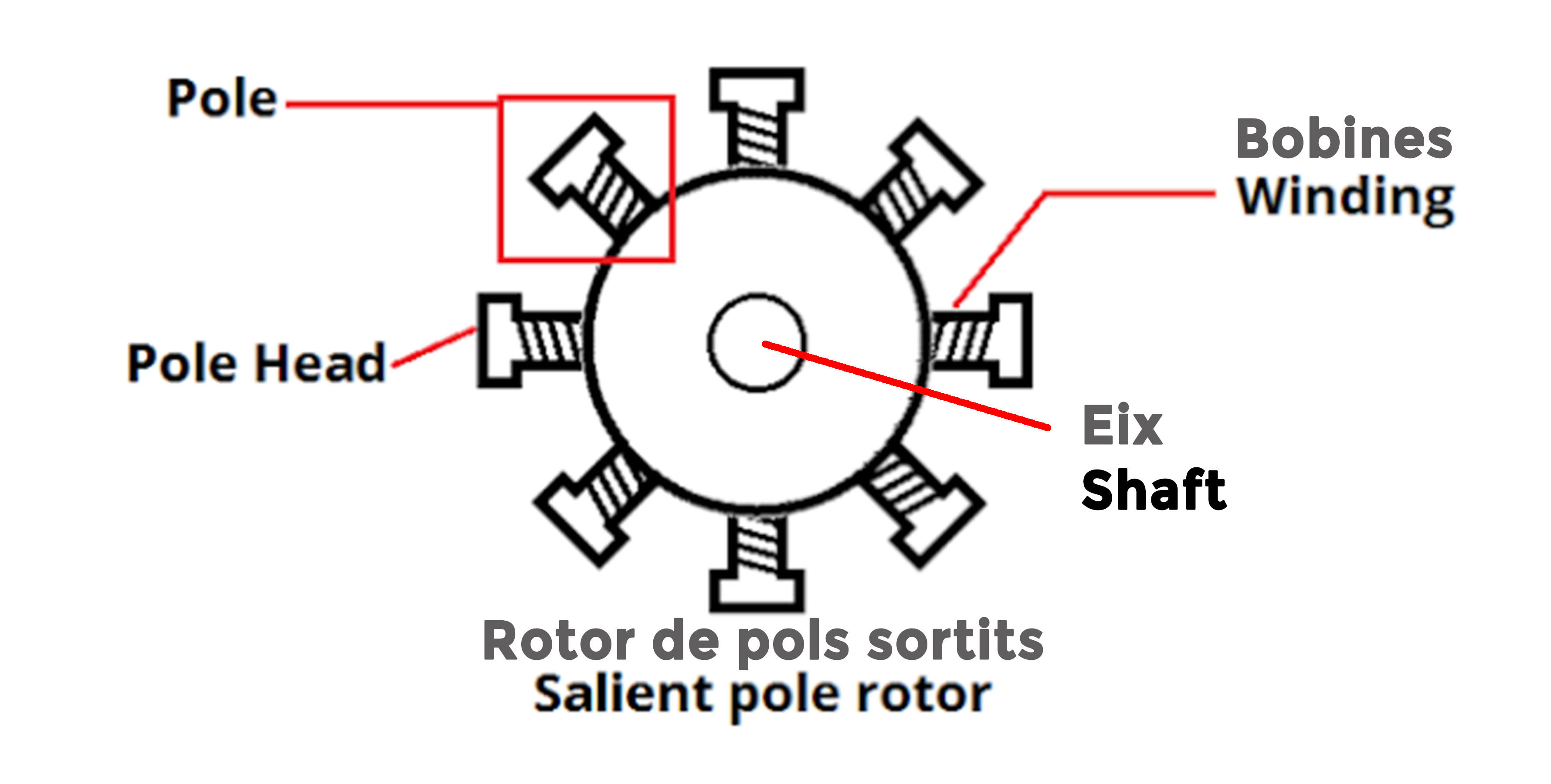 COOKIES
We use our own and third-party cookies (Google Analytics) to analyze our services based on your browsing habits (for example, pages visited). Click HERE for more information. You can accept all cookies by pressing the "Accept" button or reject their use by pressing the "Reject" button.
×